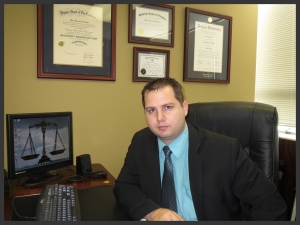 Attorney Peter F. Zooberg is a bright young man who joined Haven Law Group, P.C. in March 2009. He grew up in Spring Hill, Florida and graduated from the University of Florida in 2004, with a Bachelor of Arts in Business Administration and a Minor in Mass Communication. Following this, he went on to earn an M.B.A. (Master of Business Administration) and a J.D. (Law Degree) from Regent University in Virginia Beach, VA.

Mr. Zooberg is currently qualified to appear before the Virginia General District Courts, Virginia Circuit Courts, and the Virginia Supreme Court, as well as the United States Bankruptcy Court for the Eastern District of Virginia. He is an active member of the Tidewater Bankruptcy Bar Association. In addition to his license to practice in Virginia, he holds licenses to practice law in Florida, Georgia, and the District of Columbia.

Having filed several hundred bankruptcies for the firm, Attorney Zooberg has experience that you can trust will work in your best interest. He is well-known and well-liked among the local bankruptcy bar, both by other attorneys and trustees alike.

In addition to handling bankruptcy matters, he frequently appears on the firm’s traffic and criminal cases as well. Peter is a dedicated and hard-working attorney who will fight hard to ensure that your interests are fairly represented.

Mr. Zooberg is married to his beautiful wife, Amber, and they are raising three amazing sons, Bryson, Nicholas, and Wesley. When he is not working, he enjoys spending time with them. He is an active musician, being proficient on the drums, piano, guitar, bass, and harmonica. Over the past 18 years, he has accumulated far more musical instruments than his wife feels are remotely necessary, the cumulative value of which exceeds that of his car. He does not always play the drums, but when he does, he prefers Zildjian cymbals.